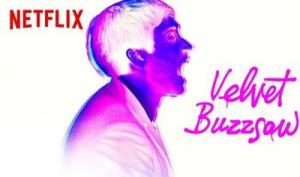 Velvet Buzzsaw, written and directed by Dan Gilroy, felt more like a schlocky TV drama, rather than a delectably vicious dissection of some of the unbearable people who inhabit the art world. Filled to the brim with unlikable characters and a plot that feels pulled out of a ‘Goosebumps’ book, this film almost immediately had me switching off and wishing I hadn’t once again given a Netflix original another shot. It seems like Gilroy’s unavoidably exciting and unnerving feature debut, ‘Nightcrawler’, might have just been a successful flook, because if Velvet Buzzsaw is anything to go off of, then there’s very little excitement left in me for his future work. So, let’s make our way into the review and see what it is that makes this another Netflix exclusive film that isn’t worth clicking on.

A collection of paintings by an unknown artist are discovered after he is found lying dead outside his apartment. The work takes the art world by storm and everyone is eager to get their piece of the visionary work. However, strange things begin to happen and soon the art begins to play a part in the deaths of some of the most prestigious members of the art community.

There are quite a few problems with Velvet Buzzsaw – problems that all inevitably pile up to a point where you just have a film that fails to have you eager to engage with any of its elements – but what I think is the film’s biggest problem – and the primary reason why I never found myself enjoying the various aspects to it – was the overall selection of totally unlikeable, mostly insufferable characters that inhabit the film.

This is a film where – *SPOILERS* – nearly every main character is haunted by and subsequently killed by the angry spirit that remains within the art it created. This means you’re watching a lot of characters who end up trapped and then killed in creatively gruesome ways. So, what would really help in moments like this is if you cared at all for any of the characters in peril.

Every time another character found them self at the mercy of this evil spirit and ultimately dead, I never once mustered any care or concern for them, and why? Well it’s because the film and its script (which I’ll touch upon in a moment) seemed to go out of its way to assemble a genuinely unlikeable selection of people and then continue to give me reasons to not like them or ever form a connection to them.

I kept thinking there might be an attempt to redeem some of the characters. To pull them back down from their place of perceived superiority and instead humanise them, show them not to be the insufferable monsters that they continue to be, but such redemption never came. There wasn’t a single character (that dies) or moment that I ever found myself sympathising with the characters or the situation they found themselves in. In fact, the only emotion that stirred in me was glee, as I’ll admit some of the murders are joyfully creative.

Maybe that’s what director, Dan Gilroy was going for. He wanted to make a film that tore chunks out of the art world and show it for what it really is (in his opinion/perception) and then in his own sadistic way kill it/them off. It does at times seem like this is what Gilroy’s intentions were overall, as he doesn’t really steer away from what became quite a formulaic experience.

Which brings me to the script that Gilroy constructed, and it is… not great. I’ve already mentioned how formulaic it becomes – with it feeling like it repeats the cycle of spooky occurrence, followed by a murder and then the rest of the characters finding out, pretending to mourn and then that leads to another being killed. But what was much worse than that and what played a massive part in the characters being as unlikeable as they are, is the repulsive dialogue that quickly grates on your ears.

Every line of dialogue feels so forced by both the characters and even the actors. There isn’t a single point of humanity in any exchange between characters. It’s as if everyone is an alien trying to mimic being a human. It was the first thing that I noticed that then went onto play a part in me not connecting or liking any of the characters on-screen, and it was a problem that never subsided.

What’s really a shame about all of this is that Gilroy assembled a great cast for his film – Gyllenhaal being one of my favourite actors – but they are all (and I mean all) wasted. Their characters have nothing to them. Gilroy doesn’t cleverly set them up as vapid, fake people and then later on unveil the real side of them. He just keeps them the one notes that they are and never evolves anyone. If he had, he might have had some really impactful moments of redemption that had your entire outlook of the character shift, but only for it to be too late, leaving you to ponder who they really were and to regret your initial judgement of them.

This never ends up being the case and, in the end, Velvet Buzzsaw comes across as an empty, schlocky movie that has the aesthetic and tone of a cheap procedural TV drama that pumps out episode after episode with no care or consistency for what it’s actually putting out.

To be honest, I can’t be bothered to talk anymore about this film. I DO NOT recommend, Velvet Buzzsaw. It’s yet another Netflix exclusive that isn’t worth loading up the site for, and it’s yet another director who sought the money and freedom of the platform, only to produce something wholly unlikeable and wholly unwatchable.

What did you think of Velvet Buzzsaw and my review of it? Let me know in the comments section down below. Also, I’ve now evolved my rambling blog into a meandering podcast with ‘The Meandering Movie Podcast’. Head over to iTunes (https://apple.co/2FUkAhU ) Soundcloud (https://bit.ly/2S4sMm6) and Castbox (https://bit.ly/2N7Z6zA) and give us a listen. If you like what you read/listened too, follow the Twitters – @GavinsRamblings and @MeanderingPod – for all the updates. Lastly, thank you so much for stopping by and giving me any support you’re willing to offer. I wholeheartedly appreciate it!